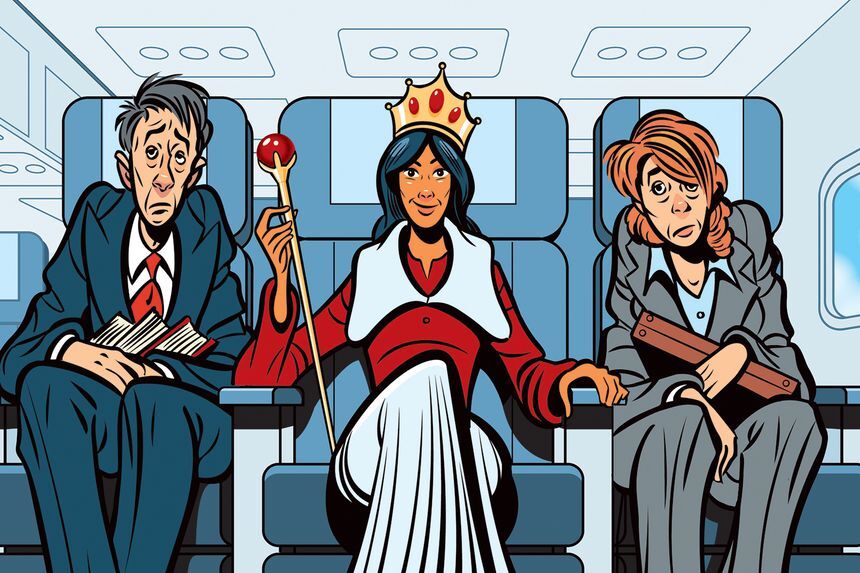 Airlines are experimenting with seats that are wider than those on the window or aisle—with an eye on charging a premium for them.

Which one might actually happen? Airlines and seat manufacturers have figured out that adding an extra inch of width to the middle seat can actually improve comfort for everyone in a row.

Frontier, Spirit, Air New Zealand , Etihad, Korean Air and a dozen other airlines have been installing coach seats with a bit more width for the poor soul in the middle. And the results have surprised airlines: Comfort scores improve across the row because the passenger in the middle isn’t infringing as much on the passengers on either side.

“That additional inch of benefit has translated into making the middle seat almost like you are agnostic across the row, which is really fascinating,”

Long before the global spread of coronavirus, the middle seat (the airplane seat, not the weekly column) has always been the most hated, and it’s doubtful fliers will ever prefer it. The middle-seat passenger will always be fenced in, unable to lean into the aisle or gaze out the window. And there will always be a battle over the armrests (which should go to the middle seat as compensation in a just world).

Airlines see an opportunity to differentiate, and even sell middle seats for higher fees. The wider middle seats have been developed for Airbus narrow-body airplanes in the A320 and A220 families. The commonly used A320 is wider than its rival, the Boeing 737. So coach seats are typically 18 inches wide, compared with a bit more than 17 inches for a coach seat on a 737.

The A220 was designed from the start with wider seats in mind. Airbus says its standard layout has an extra half-inch in the middle seat. (Delta, however, opted for all seats the same size.)

On the A320, Acro Aircraft Seating came up with a configuration giving an extra inch to the middle seat but keeping aisle and window seats at 18 inches wide. The extra space comes mostly from making the center aisle a bit narrower.

Acro says 80% of its deliveries for Airbus planes the past two years have had the wider middle seat. “It’s become our baseline product,” says Marc Westcott, Acro’s key account manager in the U.S.

“The slightly wider middle seat helps balance out the fact that the window and aisle seat customers enjoy a greater sense of space,’’

Spirit has long put 17-inch-wide seats in its A320s so it could have a spacious center aisle. Passengers and crew can squeeze by when a cart is in the aisle, and the wider aisle lets passengers board and exit faster, helping the airline shorten the time planes sit on the ground between flights.

Now, Spirit is installing Acro seats with 18-inch middle seats in each row of six seats and shrinking the open aisle space by 2 inches. The aisle is still more than 25 inches wide.

Spirit has been upping its game the past few years, improving its operation by reducing delays and cancellations. The airline has moved from near the bottom of the Middle Seat Scorecard in 2016 and 2017 to the middle of the pack last year.

Mr. Christie says Spirit took a hard look at improving its cabin and hit on the new Acro seats, which also offer some extra legroom by redesigning the tray table and introducing more curvature in the seat back. Part of the product review included exploring the idea of giving extra space to the middle seat.

Rows are still only 28 inches deep—tightest in the industry. (Most others have seat pitch of 30 or 31 inches.) And Spirit seats are “pre-reclined”—airline-speak for no recline—since they are so close to

Post-flight passenger surveys show a 40% improvement in comfort scores for the new seats compared with the old ones, Mr. Christie says. Among middle-seat passengers, there’s a 50% improvement. That makes the middle-seat score almost the same as aisle and window seats—a surprise to the airline.

“It’s an overall brand lift,” he says of the new seating.

Spirit has the wider seat on six newly delivered aircraft so far. The new seating will be on all future deliveries, and retrofit into existing planes starting later this year. By the end of 2020 it will be on more than 20 airplanes, Spirit says. As it becomes more widely available, the airline will start promoting it heavily and pricing seat assignments to reflect the added room.

There could even be a backlash from passengers in premium aisle and window seats if they feel like they are cheated out of a few precious centimeters. Space equals comfort on an airplane. For now, most of the wider middle seats steal inches from the actual aisle, not neighboring seats. But that could change if popularity grows.